LEMON AGREES TO DRESS UP AS JOELLE TO HELP OUT WADE - Wade (Wilson Bethel) somehow convinces Lemon (Jaime King) to dress up as Joelle (guest star Courtney Parks) as part of a scheme to convince Joelle's ex-boyfriend (guest star Ted Welch) that he didn't actually see Wade and Joelle together. Lavon (Cress Williams) asks Zoe (Rachel Bilson) to help him figure out why Didi (guest star Nadine Velazquez) has been avoiding him, but once Zoe uncovers the shocking reason she isn't quite sure what to do with the information. George (Scott Porter) comes to Zoe for advice in determining whether there is a medical explanation for the behavior of one of his clients. Tom Amandes directed the episode written by Debra Fordham.

Montage of Lemon trying to relax while planning the wedding.

George arrives at the bar to see Lemon (Roxy) line dancing and blows their cover.

End of the episode.

Wade & Lemon arrive at the bar to meet Ed.

Didi Ruano: "Actually, Khloe is very happily married, but I see your point."

Didi Ruano: "I think I get it! This happened with my cousin Donna and her gym teacher."

Tom Long: "It's just so great to finally see you in action! Doing your doctor thing."
Zoe Hart: "Just stocking the shelves."
Tom Long: "Well, you're doing it super-awesomely."

Lemon Breeland: "What? It's a perfectly respectable drink."
Wade Kinsella: "Yeah, if you're a hundred."

Lemon Breeland: "I believe that you deserve better, even if you don't." 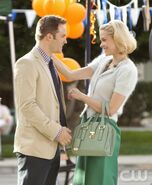 Retrieved from "https://hartofdixie.fandom.com/wiki/Aliens_%26_Aliases?oldid=13867"
Community content is available under CC-BY-SA unless otherwise noted.