Hart of Dixie Wiki
Register
Don't have an account?
Sign In
Advertisement
in: Characters, Bluebell Resident, Secondary Character,
and 5 more 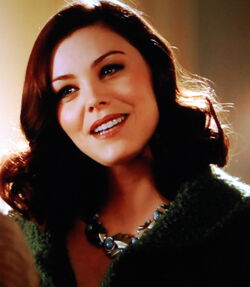 Annabeth Thibodaux is a friend of Lemon Breeland, Crickett, and Zoe Hart.

Annabeth Thibodaux -or Annabeth Nass as a married woman- is a pretty, cheerful, creative, perceptive and empathic strong lady in her late 20's. She's graduated from Auburn University where her family is considered as a sort of "Auburn Royalty" and in which she was part of the cheerleading team. At the beginning of the series events, she was a housewive really involved in her city life, being an active member of the Belles of Bluebell and even taking the lead of The Memory Matrons spot, a well-known society devoted to preserving Bluebell's history. Back then, she was eager to have a child and married to Jake Nass, a man who eventually leaves her for a waitress from Baton Rouge by the end of season 1. She was also keeping a blog -Annabeth's Blog- featured on Bluebell's website. Annabeth is really gifted in cooking and so, during season 2, starts running a catering business with her best friend, Lemon Breeland. She then develops feelings for the Mayor Lavon Hayes but decides at first not to pursue a romantic relationship with him because of Lemon's love for him. However, her best friend later gives them her blessing and so Annabeth and Lavon can start dating. Throughout the series, Annabeth also becomes a close friend to Zoe Hart. During season 3, she is employed by Bertram "Brick" Breeland as a medical secretary for the Bluebell practice and this new position eventually leads her to develop an interest in the health field and enroll in a school for nurses in season 4. In the meantime, she dates the nephew of the rival town's mayor, Davis Polk, who even proposes to her, but she declines, telling Lemon she did so because she is still in love with Lavon who now loves Lemon back again and wants staying with her for good this time. During season 4, Annabeth realizes she no longer loves Lavon and starts dating George Tucker with whom she ends up in the series finale.

AnnaBeth's ex-husband, never seen on screen, who fell in love with a woman from Baton Rouge and left her. He liked to talk about the Auburn defensive line while being intimate. Also, in matters of the bedroom, he had all the touch of a plumber trying to unclog a sink, and his idea of theatre was a carwash.

Lemon said to Jonah, "You two always did have sparks," before she set him up on a date with AnnaBeth (Take Me Home, Country Roads). At this point, AnnaBeth had already been with Lavon and was not interested in Jonah, but she went out on the date anyway. Even though the date was a disaster, it did look like Jonah wanted to take it further when he grabbed her hand. At that point, Lavon walked in, saw the two, and stormed out. Upon seeing him, AnnaBeth turned Jonah down gently and left to follow Lavon. If the two ever did have sparks that Lemon alluded to, they have clearly gone out at least as far as AnnaBeth is concerned.

A fake Englishman to whom AnnaBeth was attracted. However, when Brick cured him and he lost his British accent, the attraction quickly wore off (Islands In The Stream).

She's had a thing for him for a long time, even when she was married to Ja

ke. In the episode Mistress & Misunderstandings, she says that, were she a single woman, she would sleep with Lavon if she could. Lavon actually occupies the top two sleep with spots on her list. After her husband Jake leaves her in the episode Disaster Drills & Departures, she makes it clear at Lemon's failed wedding that she hoped the Mayor would still be available after her divorce was final, much to Lemon's displeasure. It wasn't until the episode Lovesick Blues that AnnaBeth finally got her man. We find out in Townsquare that AnnaBeth and Lavon did more than just kiss. "Oh, yes. I was amazed!" AnnaBeth says to Lavon in the episode Take Me Home, Country Roads. As of season 3, AnnaBeth and Lavon's relationship continues to develop. AnnaBeth thought that Lavon was going to propose to her in the episode Help Me Make It Through The Night, but she has a health scare and is afraid to tell Lavon that she may not be able to have children. As a result, she prevents Lavon from revealing his surprise, which is to watch the horror movie Night of The Living Dead, because she had told him that she had never seen a horror movie before. The next day when she finds out what the surprise was, she seems to be upset with Lavon and men in general. AnnaBeth admits to Zoe in the same episode (Help Me Make It Through The Night) that she has dreamed of getting married to Lavon and having children with him since he first kissed her in the episode Lovesick Blues. In the episode Family Tradition, AnnaBeth admits to Lavon that since the misunderstanding on Halloween, she has been thinking about where the relationship is heading. Lavon is visibly upset and seems confused by AnnaBeth's revelation, but he does admit to AnnaBeth that he loves her. AnnaBeth is touched by this and tells him that she loves him too. AnnaBeth and Lavon break up in the episode Should've Been a Cowboy because Lavon was unable or unwilling to admit to AnnaBeth that she was the love of his life. Read more about AnnaBeth and Lavon here.

He was a patient who faked headaches every day since he was too shy to ask her out. Brick asks AB to take Davis to Mobile. Davis refuses to go but asks AB to drink some sweet tea with him. He admits he was the knight at the renaissance fair and that he had been faking his headaches to go see her.

After AnnaBeth plans to sell her houseboat, Lemon thinks that AnnaBeth and George would be a perfect couple. Lemon tricks George and AnnaBeth to meet at the Butterstick Bakery. Lemon tricks them again to meet at Fancie's to try food for Lemon. At this point, they realize they should be a couple and start dating. They date for the rest of the series before it was cancelled.

AnnaBeth's parents' names are Gerald and Dorrie Thibodaux. They are on a retirement cruise and are supporters of the Auburn University football team. Lavon reveals their names in the episode Family Tradition when they show up to his house for a barbecue. It is also mentioned that AnnaBeth has an unnamed sister. AnnaBeth's parents are obsessed with their daughter getting married. Dorrie, AnnaBeth's mother, still keeps in contact with AnnaBeth's ex-husband, Jake's mother (Family Tradition).

AnnaBeth's ex-husband Jake was first mentioned on her blog, in a post about the Memory Matrons' silent auction, where the two adopted a coonhound puppy.[1]

Reverend Mayfair asks AnnaBeth how her mom is doing in front of Fancie's restaurant in order to distract her from finding out about Lavon's plan to save Burt Reynolds (On The Road Again).

In the episode Mistress & Misunderstandings, AnnaBeth tells Lemon that her Aunt Irene is calling her to hide her friendship with Zoe, who actually called her.

It was revealed in Disaster Drills & Departures that AnnaBeth's husband Jake left her for a waitress that he met and fell in love with while on business trips to Baton Rouge. After he left, AnnaBeth pretended as though nothing had happened, doing all the chores and yard work after dark to give everyone the impression Jake was still around. However, this routine was difficult on AnnaBeth's body and kept her neighbor, Delma Warner, awake at night. It was Zoe Hart who finally figured out AnnaBeth's situation, after which AnnaBeth shared the news of her ended marriage with her friends and the town.

Go back and watch the episode Homecoming & Coming Home. Watch the interaction she has with Lemon at the Rammer Jammer while sitting at the table. Lemon says, "We aren't the same people anymore," and, if you look quickly enough, you will notice AnnaBeth look at her wedding band with a distressed face. It's very quick but indicates that her marriage was in trouble from almost the beginning of the series.