watch 03:24
'Heart of Dixie' Profile: Brick Breeland
Do you like this video?
Play Sound

Bertram "Brick" Breeland is a a Bluebell, Alabama resident, and the town's local doctor. But he doesn’t get along with the new doctor, Zoe Hart.

Brick is one of the town physicians, who previously shared a medical practice with Harley Wilkes. Upon Harley's death, he looked forward to having the practice to himself, and was furious when Zoe Hart showed up with a claim to Harley's half of the practice, insisting his son-in-law-to-be, attorney George Tucker, search for a loophole in the legal documentation of he and Harley's partnership agreement.

Brick is the father of Lemon Breeland-Hayes and Magnolia Breeland, as well as the uncle of Jonah Breeland and Betty Breeland of Huntsville, Alabama.

Brick's wife, Alice Breeland, left him to pursue her career as an actress in 1999[1], leaving him with two children- Lemon, a teenager, and Magnolia, just two years old at the time. (Read more about Brick and Alice here.) 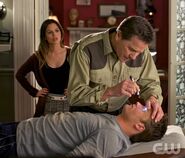 Retrieved from "https://hartofdixie.fandom.com/wiki/Bertram_%22Brick%22_Breeland?oldid=15555"
Community content is available under CC-BY-SA unless otherwise noted.