Hart of Dixie Wiki
Register
Don't have an account?
Sign In
Advertisement
in: Characters, Females, Breeland Family,
and 3 more 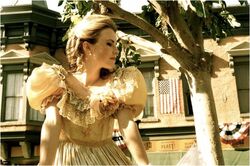 Betty Breeland, from Huntsville, Alabama spends all her summers in Bluebell, Alabama. In Bluebell, Betty is a part of the Belles, partaking in events like the Founder's Day Parade.

Multiple Sclerosis, or MS, is an autoimmune disease that affects the brain and spinal cord (the central nervous system).

Symptoms vary because the location and severity of each attack can be different- episodes can last for days, weeks, even months, and can be triggered by fever, hot baths, sun exposure, and stress. These symptoms include hearing and vision loss, double vision, slurred speech, trouble chewing/swallowing, depression, difficulty reasoning, memory loss, poor judgment, dizziness, tremors/spasms, problems with coordination, problems moving/walking, loss of balance, fatigue and much more.

There is no known cure for MS, though there are therapies that may control the disease's progression, controlling the symptoms and helping the patient to maintain a normal quality of life.

Betty was diagnosed with MS, or Multiple Sclerosis, in 2010, approximately a year before the start of the series[1], though she hasn't told anyone- a secret Dr. Zoe Hart helped her to hide, providing her with medical care until she returned home to her own doctor in Huntsville. (Parades & Pariahs)

Betty is Brick Breeland's niece, cousin and friend to Lemon Breeland, and cousin to Magnolia Breeland. (Also, former niece to Alice Breeland.)  Betty is somehow related to Jonah Breeland due to sharing the same uncle and cousins (Brick, Lemon/Magnolia respectively), though it is unknown whether Jonah and Betty are siblings or cousins.  Both Jonah and Betty have the same last name, so they shouldn't be unrelated to being on the separate sides of the family (i.e. one being Brick's blood nephew/niece and other being Brick's marital nephew/niece).

Betty may have been named after the Breeland family matriarch, her grandmother, Bettie Breeland.