Blue Christmas is the 10th episode of Season Two and the 32nd episode of the series.

MEMORIES OF CHRISTMAS PAST — Zoe (Rachel Bilson) finds herself anxious that her ever-critical mother will be visiting BlueBell soon for the holidays. In order to avoid spending quality time with her mother, she busies herself with a patient but potentially ruins Christmas Eve for the whole town. Trying to fix the problem, Zoe upsets Wade (Wilson Bethel) by turning to his dad (guest star Christopher Curry). Meanwhile, Lavon (Cress Williams) is desperate to make the week special for Ruby (guest star Golden Brooks), but his plan goes awry when Lemon (Jaime King) gets involved. Elsewhere, George (Scott Porter) is struggling with picking out the perfect present for Tansy (guest star Mircea Monroe). Patrick Norris directed the episode written by Leila Gerstein.

Lavon : The Holidays are time for...
Zoe: Judgement and fear

Shelby : I am just loving this little town.

Zoe : Your dad is going to be Santa.
Wade : What is wrong with you? 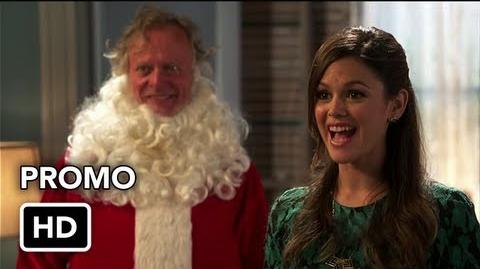 Retrieved from "https://hartofdixie.fandom.com/wiki/Blue_Christmas?oldid=9966"
Community content is available under CC-BY-SA unless otherwise noted.