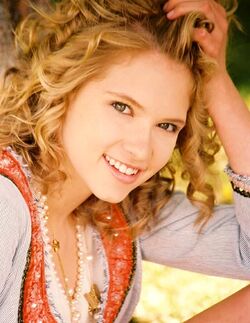 She is the second child of a Polish-American immigrant father and an American-born mother. As a little girl, watching TV, she dreamed of being an actress, and loved performing around the house. She began studying dance before her 3rd birthday, learning ballet, tap and jazz. Growing up listening to her father and his relatives speak Polish, she decided that, too, wanted to learn the language, so her parents sent her to a private school in Poznan, Poland for one month each summer, for the next five years. Lee is now conversational in her father's native language.

When she was 13, Claudia studied acting and filmmaking at the School of Cinema and Performing Arts (now called the School of Creative and Performing Arts) summer camp in Vermont. Her roommate's parents were friends of Harry Abrams, president of the Abrams Artists Agency, and introduced her to him. The agency offered to represent Lee, and she and her mother moved to Los Angeles in the summer of 2009, while her father remained in Indiana, to continue running his business. After arriving in Hollywood, Lee began taking acting classes.

Lee's first professional acting job was in a national TV commercial for Comcast, with Zachary Levi. Next, she was cast in a short film, The Circus Girl, playing a young Russian villain traveling with a circus family. Next came Lee's recurring role of Bridget on the Disney XD series Zeke and Luther. More recently, she was cast in the recurring role of Magnolia Breeland, the younger sister of Lemon Breeland (Jaime King) on the CW series Hart of Dixie.

Lee is also a country music singer. After arriving in Los Angeles, she teamed up with music producer Max DiCarlo to record her first song, It Gets Better, which was inspired by the It Gets Better campaign against bullying in schools. In an unusual twist for a music video, Lee is seen on camera for just the last few seconds, with the video focusing, instead, on images of ordinary people who have been bullied or made fun of.

After completing It Gets Better, Lee and DiCarlo spent several months recording a country music album, to be released early in 2012. The first single, Hollywood Sunset, was released in September of 2011. A playful love song, the video depicts Lee strolling through Hollywood with her would-be boyfriend, played by Noah Hunt.

Retrieved from "https://hartofdixie.fandom.com/wiki/Claudia_Lee?oldid=5797"
Community content is available under CC-BY-SA unless otherwise noted.