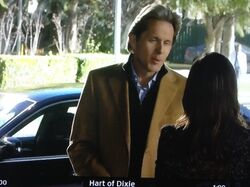 After going through medical school and residency at New York Hospital, Ethan became a highly successful cardio-thoracic surgeon, who has treated patients of a prestigious level such as German diplomats (Pilot).

Ethan married Candice Hart sometime between 1982 and 1983, and shortly after the two welcomed a daughter, Zoe Hart, into the world.

It seems that Ethan and Zoe were close in her childhood years, and she dreamed of becoming a cardio-thoracic surgeon with the ultimate goal of someday even becoming his partner. (She would later even perform her residency at the same hospital- New York Hospital).

When Zoe was ten years old, she had an accident where she fell off a swing, and the doctors thought she might need a blood transfusion. When Ethan tried to donate blood, and proved not to be a match for his daughter, it was revealed to him that he was not Zoe's biological father, and that shortly before their marriage, his wife had an affair with older Southern gentleman named Harley Wilkes while on a Greek cruise.

This revelation was difficult for Ethan to handle, and he soon left his family, divorcing Candice Hart. He apparently attempted to remain a part of Zoe's life (who still believed him to be her father) for a time, but found it difficult and became very distant from her. He also aided his then ex-wife, Candice, for a time, in keeping up appearances at public events and functions, and letting the public to believe their marriage was still intact, because of Candice 's fear the divorce would be bad publicity.

Retrieved from "https://hartofdixie.fandom.com/wiki/Ethan_Hart?oldid=14349"
Community content is available under CC-BY-SA unless otherwise noted.