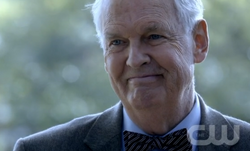 Harley Wilkes was a kindly doctor from Bluebell, Alabama.

However, this could be the address for the medical practice.

Harley was a beloved doctor in Bluebell, Alabama, treating families at his practice for 45 years. At some point, he began a partnership with Dr. Brick Breeland, and the two owned and worked out of the practice together.

Harley had a brother, Jacob Wilkes. (Maureen Wilkes may be a sister of the two, or she may have been Harley's sister-in-law and been married to Jacob.) Claire Wilkes was their mother, and her second husband (though it is unclear whether or not he was Harley and Jacob's father) was named Guy.

As a result of a cruise ship romance in Greece sometime in the 1980s[1] with soon-to-be Mrs. Candice Hart, Harley Wilkes' daughter Zoe Hart was born. (It is as of yet unknown how Harley discovered he had a daughter, since Candice Hart gave no sign to either Zoe or her fiance (later, husband), Mr. Hart, that anything was amiss.)

In 2007, Harley approaches his daughter Zoe Hart, though their relationship remained a secret to her, with a job offer at her graduation from medical school. Despite her refusal, he continued to send her offers via postcard for the next four years.

Zoe finally accepts Harley's offer in September of 2011[2], but upon her arrival in Bluebell, Alabama, she finds that Harley had passed away four months prior, in May, and left his half of the medical practice to Zoe, along with instructions to his secretary, Emmeline Hattenbarger, to continue to send the postcards. Later, Zoe learns from Emmeline that Harley Wilkes was her real father.

Retrieved from "https://hartofdixie.fandom.com/wiki/Harley_Wilkes?oldid=15325"
Community content is available under CC-BY-SA unless otherwise noted.