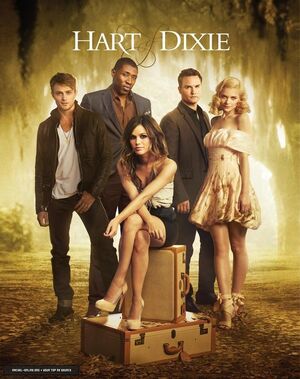 Fast-talking New Yorker and brand new doctor Zoe Hart has it all figured out - after graduating top of her class from medical school, she'll follow in her father's footsteps and become a cardio-thoracic surgeon. But when her dreams fall apart, Zoe decides to accept an offer from a stranger, Dr. Harley Wilkes, to work with him at his small practice in Bluebell, Alabama. Zoe arrives in this small Gulf Coast town only to find that Harley has passed away and left his half of the medical practice to her in his will. She quickly finds that Southern hospitality isn't always so hospitable - the other doctor in town, Brick Breeland, is less than pleased to be sharing the practice with this young outsider, and his daughter, Lemon, is a Southern belle whose sweet disposition turns sour when she meets Zoe. Zoe's only allies are the mayor, former football star Lavon Hayes, her bad-boy neighbor Wade Kinsella, and handsome lawyer George Tucker - who just happens to be Lemon's fiance. Zoe is out of her element and ready to pack her bags, but a surprise visit by her snobby New York mother leads to Zoe's decision to stay in Bluebell for a while, discovering small-town life and a side of herself she hadn't known was there.

On May 8, 2014, the CW renewed the show for its fourth season. On July 18, 2014, CW president Mark Pedowitz announced that Hart of Dixie would have ten episodes for its fourth season, which premiered on December 15, 2014. On March 14, 2015, Leila Gerstein revealed that season four of Hart of Dixie would be its last. The series cancelled by The CW on May 7, 2015 after four seasons.

Much of the pilot episode of “Hart of Dixie” was filmed in the lovely Wilmington, North Carolina, which you may have recognized from CW staples “Dawson’s Creek” and “One Tree Hill”. But since then, they’ve brought filming back to Los Angeles and have recreated the fictional town of Bluebell, Alabama on the Warner Brothers lot. [LiveTheMovies ]

If you’re a fan of the HBO series “True Blood”, you probably recognized the exterior of the Rammer Jammer as the same that stands in for Merlotte’s. That’s because this exterior is on the Warner Brothers backlot, which both shows use for filming. [LiveTheMovies ]

"Elvira Mistress of the Dark" was also filmed on this lot.

Right nearby, in the “jungle” area of the WB backlot, is a little shack used as Wade’s cabin. It was used as a cafe in Million Dollar Baby and has been seen on “Pretty Little Liars” and “The Mentalist” as well. [LiveTheMovies ]

If you're a fan of “Pretty Little Liars” or “Gilmore Girls”, you might have noticed the town square setting from the parade scenes (episode 102) in “Hart of Dixie” — that’s because it’s all the same town square! That’s right: Stars Hollow, Rosewood, and Bluebell are all the same with some different set dressings. [LiveTheMovies ]

The show has received mixed reviews including a 43 out of 100 from Metacritic.

TVLine has described the show as "Everwood-esque". TVLine later said: "Beautifully filmed with warm, cozy tones, the Southern setting utterly envelops the glowing Bilson" adding that Porter's appearance "wins us over and makes you forget that clunky intro" and despite the "rom-coms clichés, the pilot is super-efficient at introducing us to those who will be the key players in Zoe’s story, laying the framework for storytelling places to go." TVGuide.com described the show as "Southern Exposure" and added: "Expect culture clashes galore".

Writing for The New York Times, critic Neil Genzlinger wrote, "...the premiere, at least, doesn’t find a convincing way to balance the clashing strands: the city-mouse disorientation, the medical emergencies, the girlfights, the daddy issues, the young-pretty-and-available stuff." Robert Bianco of USA Today wrote that the show is shallow, far-fetched and potentially offensive to people from Alabama. Bianco also wrote that Bilson gives an unconvincing performance, such as acting surprised when calling herself a doctor. Los Angeles Times reviewer Mary McNamara described the show as, "a stack of familiar scenarios stitched together to form a pretty if not terribly substantial quilt."

Retrieved from "https://hartofdixie.fandom.com/wiki/Hart_of_Dixie?oldid=14168"
Community content is available under CC-BY-SA unless otherwise noted.