ZOE HART GOES BELLE! — When Zoe (Rachel Bilson) goes in search of some family history in Bluebell, she discovers that she is a legacy to the Bluebell Belles. Of course, once Lemon (Jaime King) catches wind of the news, she makes it her sole mission in life to make sure Zoe doesn’t become an official Belle and puts her through a humiliating initiation. With the help of Wade (Wilson Bethel), Lavon (Cress Williams) attempts to jump back into the dating scene, but he finds it difficult because Didi (guest star Nadine Velazquez) is telling everyone that he’s in love with her. Meanwhile, George (Scott Porter) devises a plan to stop a huge chainstore from building near Bluebell and as a result driving business away from the town. Janice Cooke Leonard directed the episode written by executive producer Donald Todd.

==Soundtrack== no music -only the theme song

Didi Ruano: "We're going to blow up a road? I love this job."

Maureen Wilkes: "You must look like a lunatic- fit right in in Bluebell."

Didi Ruano: "Friends? How can I be your friend when I know you want to marry me?"

AnnaBeth Nass: "Let's maker her drink a milkshake every day- she'll get so fat!"

Wade Kinsella: "Do like I've always done and just stay away from Crazy Earl."

AnnaBeth Nass: "Wait, do you people go to heaven?"

AnnaBeth Nass: "I can't have a baby because I've been cursed by Lemon."

Zoe Hart: "I am a belle, a southern belle, a Dixie belle, a 'bama belle, and I have secrets I won't tell. If y'all don't like it go to hello soldier, what's your pleasure?"

Lemon Breeland: "Just a couple of pretty vampires filling up on blood before we all go out on a killing spree!"

Zoe Hart: "Be nice. Let them have babies."

Lemon Breeland: "I'm a witch with the power to make women infertile."

Didi Ruano: "If you're not all Looney Tunes, then I want to go out with you myself."

Lemon Breeland: "Garbage? Are you insane?"

Lemon Breeland: "If who we are is who we came from, then I am destined to be the worst mother in the world."

Wade Kinsella: "Get some decent food. You look like crap."

Brick Breeland: "The way you toughed it out, didn't quit- that's a Wilkes if I've ever seen one." 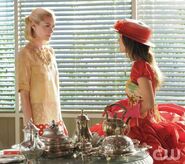 Retrieved from "https://hartofdixie.fandom.com/wiki/Hell%27s_Belles?oldid=15311"
Community content is available under CC-BY-SA unless otherwise noted.