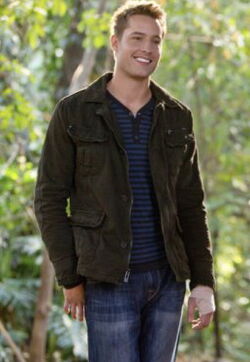 Jesse Kinsella served in the US military, and even received an award for his shooting. He is the brother of Wade, and the son of Crazy Earl. He appeared in only one episode.

Jesse grew up in Bluebell, Alabama with his family, consisting of his father, 'Crazy' Earl Kinsella the 'town drunk' and brother Wade Kinsella. He and Wade have a difficult relationship, and Jesse doesn't seem to quite understand why Wade harbors resentment toward him.

Wade has also referenced an 'Uncle Mo' who has a 'pretty kickass' gumbo recipe. (Gumbo & Glory)

Wade is married to Zoe Hart now, making her his new sister-in-law

Has a nephew through Wade

Jesse met Dr. Zoe Hart at the Bluebell medical practice , where she took care of his sprained wrist. The two hit it off quickly, and she agreed to a lunch date later that day. However, events ensued and it was quickly discovered that Jesse was in fact, Wade Kinsella's brother- which led to an incident where Zoe overheard a stinging conversation between Wade and Jesse. After this, Jesse clearly still retained his interest in Zoe while Zoe took a step back, remarking "I can't always stay out of people's business, but when I can I probably should" (Bachelorettes & Bullets). Read more about Jesse and Zoe here.

Retrieved from "https://hartofdixie.fandom.com/wiki/Jesse_Kinsella?oldid=14854"
Community content is available under CC-BY-SA unless otherwise noted.