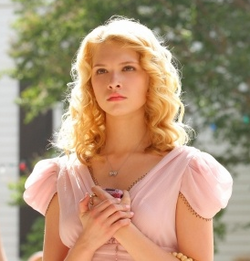 Magnolia Breeland is currently seventeen and a former student at Bluebell, Alabama's Cyrus Lavinius Jeremiah Jones High School and the youngest daughter of Brick Breeland and sister of Lemon Breeland.

Magnolia is the youngest daughter of Dr. Brick Breeland, and younger sister of Lemon Breeland.

She was two years old when her mother, Alice Breeland, left her family. Magnolia was raised primarily by her sister, Lemon, who is fourteen years older.

Magnolia evidently has an interest in Frederick Dean. The two attended the Founder's Day Parade together, though Rose Hattenbarger, a rival of Magnolia's, insists that she is "only toying with him" (Parades & Pariahs). During the Miss Cinnamon Cider pageant, Magnolia implies she and Frederick may bein a relationship, telling Rose Hattenbarger to 'find her own contest, and her own boyfriend' (Hairdos & Holidays).

Magnolia's relationship with her sister at the beginning of Season 1 was one of a mother and daughter. Throughout the season the duo deal with their mother's abandonment, and through this become closer.

Add a photo to this gallery
Retrieved from "https://hartofdixie.fandom.com/wiki/Magnolia_Breeland?oldid=14867"
Community content is available under CC-BY-SA unless otherwise noted.