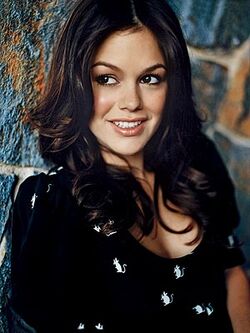 Bilson has been recognized by several media sources as being a "fashion junkie".[36][37][38] She has described herself as having a "vintage" sense of style, and has noted Kate Moss and Diane Keaton as inspirations.[38] Her clothes often have a "boho" feel to them. She approached DKNY Jeans in late 2007 with a view to design a clothing line with the popular fashion brand.[39] Together they created Edie Rose. The collection was launched in September 2008. It consisted of mainly black and white separates with a splash of yellow that could easily work with an existing wardrobe. Her idea was to keep fashionable items accessible to young women by keeping the prices of each piece under $100.[40] An advertising image was released in July 2008 which featured Bilson modelling her Edie Rose collection.[41] Of her line, she said in an interview with Teen Vogue that "I wanted to keep it as separate as possible from Rachel Bilson the actress. I'm hoping people will appreciate it for the clothes, not the person behind them."[42] Much of her fashion collection was lost when her home was burglarized in May 2009.[43] Bilson's fashions and sense of style made her the unwitting target of the Bling Ring, who burglarized her home on several occasions.[44][45]

Before appearing in Maxim, Bilson had turned down requests to appear seminude in men's magazines, specifying that she feels that her body "is sacred" and "not there for the whole world to see".[46]

Rachel Bilson in Jumper
Add a photo to this gallery
Retrieved from "https://hartofdixie.fandom.com/wiki/Rachel_Bilson?oldid=14037"
Community content is available under CC-BY-SA unless otherwise noted.