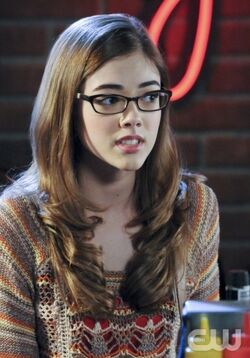 Rose Hattbenarger is a blogger, fascinated by New York, NY and a big Sex and the City fan.

Rose is a niece of Emmeline Hattenbarger (and cousin to Emmeline 's unnamed daughter mentioned in Parades and Pariahs), and daugher of Annie Hattenbarger.

Rose has a big crush on her classmate Frederick Dean, also a student at Cyrus Lavinius Jeremiah Jones High School, a 'Chew' reader and fan of history podcasts.

However, while she and Frederick Dean often talk about their shared interests (with help from Wade Kinsella), Rose is troubled that Frederick Dean doesn't notice her aside from these, vying for his attention with Magnolia Breeland, who according to Rose, is "only toying with him". They do however end up in a relationship for a while after that.

Retrieved from "https://hartofdixie.fandom.com/wiki/Rose_Hattenbarger?oldid=14798"
Community content is available under CC-BY-SA unless otherwise noted.