Start a Wiki
watch 03:19
'Heart of Dixie' Profile: Wade Kinsella
Do you like this video?

Wade Kinsella is Bluebell's resident bad boy with a heart of gold. Wade is friends with the Mayor, Lavon Hayes, and lives in the gatehouse on the Mayor's Plantation, sharing a generator with the carriage house, where Dr. Zoe Hart moved in. He works as a bartender at the Rammer Jammer, in the latter part of Season Two he partners up with Lemon Breeland in buying it, and in Season 3 becomes the sole owner of it.

On the surface, Wade Kinsella comes off as a bad boy who doesn't care what other people think. But as you get to know him, you'll notice he has an inferiority complex, which is especially apparent when he talks about George Tucker's successes. It also becomes apparent that Wade is in love with Zoe, even though the most challenging of times and even though he can't admit it to himself.

(Father)
His father, "Crazy Earl" is the town drunk, whom Wade is forced to sing down from the roof of Nate's Hardware each month when he cashes his government check and gets drunk, threatening to jump off a building. Wade often provides his father with money for food and clothes, and has expressed a desire for his father to be able to 'stand on his own two feet'. It is implied that the cause of Earl's alcoholism began after the death of his wife, Wade's mother, Jacqueline Kinsella who died of cancer around Christmas time when Wade was a young child.

(Brother)
Jesse is Wade's brother, an eco-geological Oceanographer who served in the US military and no longer lives in Bluebell. Wade does not get along with Jesse. He harbors resentment toward his brother because Jesse left while Wade felt a responsibility to stay to take care of their father, and because Jesse still doesn't seem to clearly think through his actions. Jesse once bought Earl a car for his birthday, much to Wade's disgust, because it was always Wade who had to take away his drunken father's keys for his own safety.

(Wife/Mother of his child/Soulmate/Best Friend)
Neighbors, Wade and Zoe have an obvious attraction to one another- an attraction that nearly turned into more during the 2011 Bluebell heat wave (In Havoc & In Heat). Wade has swooped into Zoe's rescue a number of times- as her driver, entering his gumbo under her name in the Gumbo Cook-Off (Gumbo & Glory), staying with her through the night (The Undead & The Unsaid), etc. Wade was relieved to hear that Zoe didn't think she and Judson were meant to be, and was even able to cheer her up about the situation with Judson afterward (Homecoming & Coming Home). Wade is also extremely reluctant to install the new fusebox Lavon purchases, even lying to Lavon about his electrical skills- Lavon Hayes soon catches on and encourages Wade to be honest with Zoe about his feelings for her, and he attempts to do so while driving her to the airport for her to return home to New York for Thanksgiving, but the attempt falls through when she changes plans and decides to stay in Bluebell (The Pirate & The Practice). Wade gets visibly jealous of Zoe and George's association with one another, and even confronts his friend, George about it, suggesting he stay away from Zoe.

Wade later discovers Zoe on a date with his estranged brother, Jesse, much to his dismay. However, he tries to deny his feelings for Zoe, and tells his brother he's free to date her because they're both snobbish and superior and would be perfect together. Unfortunately, Zoe overheard this exchange and later confronted Wade, asking if this was what he really thought of her. Wade says yes to this and continues to point out the three men who have caught her eye since her arrival in Bluebell - a veterinarian, a lawyer, and an eco-geologist oceanographer/army hero - all lucrative careers, and takes off in his truck. (Bachelorettes & Bullets) Zoe and Wade are trapped in a barn during George and Lemon's wedding day. They are later taken back to their respective houses to get ready for the wedding. Wade goes to Zoe's and they have sex. (The Big Day) Unbeknownst to them, George calls the wedding off due to his feelings for Zoe and comes to Zoe's to confess his feelings.

In season two, they start dating.  In episode 2x15, however, Wade ends up being caught with another woman after his failed attempt to win the Battle of Bands Competition and win the prize money to start his own bar. (The Gambler) They break up in episode 2x16. (Where I Lead Me).

Zoe confesses her love to Wade at the end of season three, after Wade and Vivian, and Zoe and her boyfriend Joel, have broken up. Wade rejects her out of fear of getting hurt, but, after seducing him, she soon convinces him to give them another chance. After their first date, Zoe announces to Wade that she's pregnant with their child. Wade hopes to show Zoe he's serious about their relationship by proposing which prompts Zoe to run back to New York. Wade follows Zoe to New York and tells her she is the love of his life. The two get back together, have their baby, and get married at the end of season four (series finale). they finally find their love of there lives

(Ex-Wife)
Wade and Tansy were married on a shrimp boat in international waters sometime in 2007[1]. The relationship only lasted four months, though they didn't officially divorce until four years later, in 2011 (The Crush & The Crossbow). Wade attempted to finalize the divorce a number of times, but Tansy had a number of excuses, including something with her mom and a vacation in Branson. Even after she returned to Bluebell with her fiance, Colt, intending to sign the divorce papers, she was willing to throw away her relationship with 'Colt', or Todd Gainey Jr., when she believed Wade to still have feelings for her. Read more about Wade and Tansy here.

(Ex-Girlfriend)
Wade and Vivian met through Zoe, who is Vivian's cousin. After their first date Vivian asked Zoe about Wade and ignored him because of Zoe's experience with him. They eventually went out again and continued their relationship. Vivian ultimately breaks up with Wade when her ex-husband decides he wants to get back together with her and gets a job out of town.

A more complete gallery can be found here. 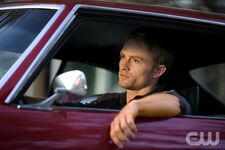 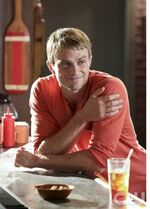 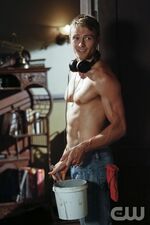 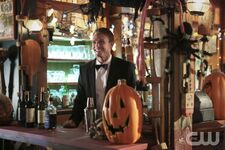 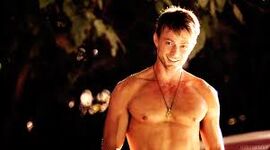 Wade Kinsella😍
Add a photo to this gallery

Retrieved from "https://hartofdixie.fandom.com/wiki/Wade_Kinsella?oldid=15503"
Community content is available under CC-BY-SA unless otherwise noted.