COMPETITION - Lavon's (Cress Williams) big plans of making BlueBell a Spring Break destination hits a roadblock when the competing town tries to lure the partiers away. With the help of Ruby Jeffries (guest star Golden Brooks), Lavon creates a competition that is bound to attract some attention. Eager to join in some much-deserved fun, Zoe (Rachel Bilson) agrees to give partying a try with Jonah (guest star Travis Van Winkle), but seeing them together makes George (Scott Porter) jealous. Wade (Wilson Bethel) and Lemon (Jaime King) decide to compete in Lavon's contest in order to win the grand prize to buy the Rammer Jammer, which they have learned is for sale. Meanwhile, Brick (Tim Matheson) has been acting odd and when everyone begins to notice they force him to seek treatment.

Zoe Hart exits her house and sees that the Mayor’s Pond is overwhelmed with Spring Breakers and gets hit in the head by an inflatable ball. Zoe isn't surprised when sees Wade enjoying the festivities. Mayor Lavon Hayes is hosting the party because he wants to draw people to Bluebell for publicity and the business. Zoe mentions all the negatives that happen during Spring Break like civil disturbances. Zoe and Dr. Brick Breeland are talking about the spring break craziness at the medical practice and Brick mentions that he sent his daughter Magnolia Breeland to bible camp in the hopes that she doesn't get into trouble. Dr. Jonah Breeland appears and suggests that they could hook up. Zoe mentions that she didn't have a typical Spring Break and she used the time to study. She initially rejects Jonah's proposal to party. The Sheriff Bill Pickett tells Mayor Lavon that he needs more modern crime fighting technology to do his job. Sgt. Jeffries is at the Mayor Plantations culture-shocked at all the bikinis. Mr. Wally Maynard seeks medical help and tells Zoe that he is thinking of selling the Rammer Jammer due to all the stress. AnnaBeth Nass and Lavon talk and Lavon tries to hookup with AnnaBeth, but AnnaBeth uses the Lady Code excuse again. At the Rammer Jammer, he hangs a ‘For Sale’ sign. Wade tells Mr. Maynard that he is interested in buying the place, which Mr. Maynard laughs at. Lemon Breeland suggests that she and AnnaBeth could buy the Rammer Jammer. AnnaBeth initially says no, but Lemon persuades her to help her. At the Spring Break party, Lavon spots his ex-girlfriend Ruby Jeffries and sets up a coffee date.

At the Rammer Jammer, Mr. Maynard talks to George Tucker. George is annoyed by Dr. Jonah Breeland. They argue with George saying that any woman that would for Jonah’s charms is stupid. Zoe comes and sets up a date with Jonah. Mayor Todd Gainey Sr., from the competing town of Fillmore, appears and “hijacks” the Spring Breakers.

Wade and Zoe talk at the Lavon’s house. Wade warns Zoe about how men can be dogs and Zoe puts that comment back at Wade (for cheating on her). George warns Jonah about that Zoe just got out of a relationship and she doesn’t need sleazebag. Jonah sticks up and says that Zoe can decide if she wants to play doctor with a real doctor. Waiting for the date, Zoe and Jonah wait for Brick to show up to cover for her. George calls Zoe telling her that Brick and he are stuck on the road with a broken tire on their way back from going fishing. It's revealed that they took the scenic route so they could see the migrating ducks fly pass. Brick crashed into a tree and apparently hurt his wrist trying to fix the tire. This means that their spring break inspired date is cancelled and Jonah throws out the idea that George took the "scenic route" on purpose. This upsets Zoe and she tells Jonah that George is the good guy and Jonah is the bad person. The next day, Zoe goes to George’s and figures out that George doesn’t want Zoe with Jonah. This also gets him into some trouble with his current girlfriend Tansy. Later, George goes to Brick's to return some fishing stuff and notices that Brick is carrying a heavy box with no pain with his wrist. He suggests that Brick should cover for Zoe since they screw her out of Spring Break the night before. Later that day, Shelby goes over to George’s and Tansy remarks about the newest guest "here is more of your past that came to visit". Shelby is concerned over Brick’s well-being because Brick has gotten headaches and George notices the miraculously healed wrist injury. George goes to warn Jonah and Zoe about the health concerns that Shelby and he has about Brick. Both initially thinks that this is another scheme, but are convinced later. Zoe and Jonah meets with Brick and Brick agrees to go to Mobile Prebsyterian for an MRI. Brick wants this to keep quiet. Meanwhile, AnnaBeth tells Lemon about Ruby being in town to sponsor a “Palms On A Pleasure Craft” Contest. Lemon runs over and enters it to raise money, $50,000, to buy the Rammer Jammer. Wade is seen also in the contest and remarking shocked that she is in the contest. At the boat contest, Lemon talks to AnnaBeth and sees that Wade is lying about his father being dead. Lemon tells the woman the Wade’s father is indeed alive. Wade tells the woman that he told her the story to have her sleep with him. The woman slaps Wade with the hand that was on the boat and thus loses. Wade smirks and reveals that this was just a ploy to eliminate one of the contestants. After some time has passed and some contestants being eliminated, Lemon uses a similar tactic on another woman (#2) thus Lemon and Wade thinks that they are the last two remaining contestants. However, there is another woman (played by Charlotte Newhouse) that uses reversed psychology on Lemon and tells her about hallucinations that she will get if she sticks it out. The "Charlotte" lady starts singing 99 bottles of beer on the wall and various other annoying repeating songs. Lemon and Wade team up to get "Charlotte" to quit the competition via Tom Long’s lizard costume. The hours go by with 14 hours passing, then 36 hours. Lemon tells Wade that she is doing this because this is the only thing she can do by herself. Zoe shows up and tells Lemon that Brick is having a brain MRI. Lemon says that she needs to go and lets go of the boat. Wade decides to let go as well at the same time. They later discuss that they could go into partnership.

At the hospital, Shelby arrives after figuring out what was going on. Lemon gives her blessing for AnnaBeth to be with Lavon. George and Zoe talk about the whether or not George caused some of the 'crash into the tree' incident on purpose to cause Zoe and Jonah to not being able to go out. George says that he doesn't like Jonah and he might be a little jealous. They both brush and joke about that there would any romantic jealously. George tells Zoe that he will try to be more civil around around Jonah. Jonah and George start a small argument over at the vending machines. Brick comes out and tells the group that it is a minor treatable migraine. AnnaBeth goes over to Lavon's and says that she is "putting her hat in the ring" and Lavon says that Ruby left after Lavon says that he has stronger feelings for another woman. They kiss. Elsewhere, Jonah tells Zoe that he is heading to New York and tells her that she isn't the "spring break girl" and she is more of a "scenic girl who likes to watch the ducks" most likely referring to Zoe and George's similar lifestyle. Jonah drives off but is able to see Zoe flash her beautiful breasts at him.

This gallery only shows the official pictures released for the episode you're looking for. A more complete gallery can be found here. Any future additions should be done there. 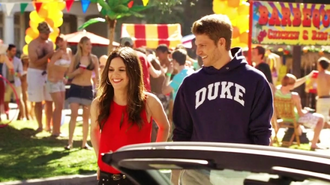 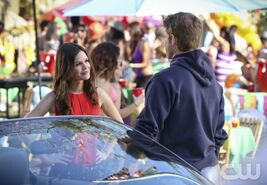 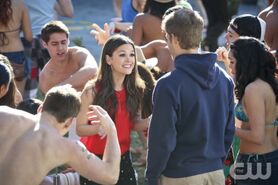 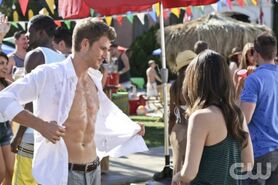 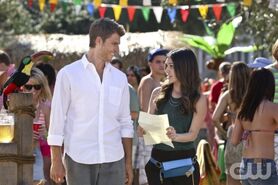 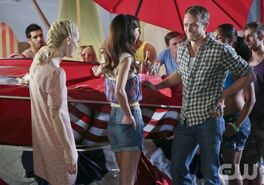 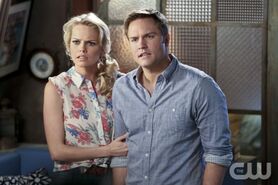 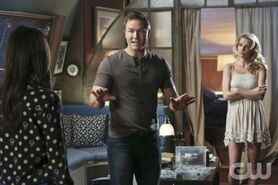 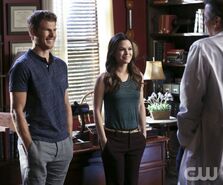 Retrieved from "https://hartofdixie.fandom.com/wiki/Why_Don%27t_We_Get_Drunk%3F?oldid=13885"
Community content is available under CC-BY-SA unless otherwise noted.