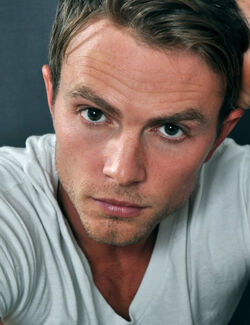 Bethel has two upcoming films: "The First Ride of Wyatt Earp," opposite Val Kilmer, and "Stealing Summers," opposite James Jagger, son of Mick. Within the past year, he has also filmed 80 episodes of "The Young and the Restless," playing the terminally embattled heartthrob, Ryder Callahan.

Bethel landed his big break in the Emmy-nominated HBO miniseries "Generation Kill" in 2008, playing a young recon Marine alongside Alexander Skarsgard and Stark Sands. He made news in early 2010 as a final contender for the title role in Marvel's "Captain America."

Previous television credits include "Cold Case," "NCIS" and "The O.C." In fact, Bethel guest-starred as Summer's (Bilson) boyfriend on "The O.C."

A longtime DJ and record collector, Bethel is a self-proclaimed vinyl nerd. In addition to his years of DJing in Los Angeles and New York, Bethel has kept a long-running music blog (check out good music at mixtaperiot.com) with his older brother, Charlie. In his spare time, he also enjoys playing guitar, reading, riding his bicycle and getting busy on the dance floor.

Retrieved from "https://hartofdixie.fandom.com/wiki/Wilson_Bethel?oldid=13626"
Community content is available under CC-BY-SA unless otherwise noted.